Your cart is empty

Food is a big deal in my life, for the obvious reason of course, but also because I associate food with good

memories. Even the sad, difficult and bittersweet memories have food crumbs all around them. Family

milestones and memories most often take place around the table laughing, talking and eating.

Sharing food, or Food Networking as I call it, comprises much of my life, I believe my family and friends really

enjoy when we gather around the table. We connect while sharing my frijoles fritos and other tasty dishes, it is

wealth of memories into the treasure box.

This Fathers day will be my first one without my earthly father. Thankfully, I was able to give myself some wonderful

memories with my apa as we celebrated his last Fathers Day last year, despite the pandemic. He left me one more

jewel, a wonderful conversation about tamales! Asi es, how fitting that my apa had a childhood memory about

tamales. With some effort, I was able to extricate it and bring it to the table.

One beautiful sunny San Diego afternoon, I took dad out to get some much needed sunshine and fresh air. My apa

was well over 90 years old when he came to live with my family. He battled dementia and on good days he was

that I knew nothing about my father's food memories, specifically his tamal experiences! Tamales have become quite

relevant for obvious reasons, most notable is that I’ve discovered the acceptability and ease of “purchasing tamales.”

How was it possible that maiz, masa y tortillas were all an important part of my dad's daily life and I hadn’t heard not

one story about tamales? He had described the maiz and corn mill, talked about the tacos de frijoles, I'm sure there

had to be a tamal memory in the archives, so I prepared to dig it out, it was a perfect day for that kind of work. 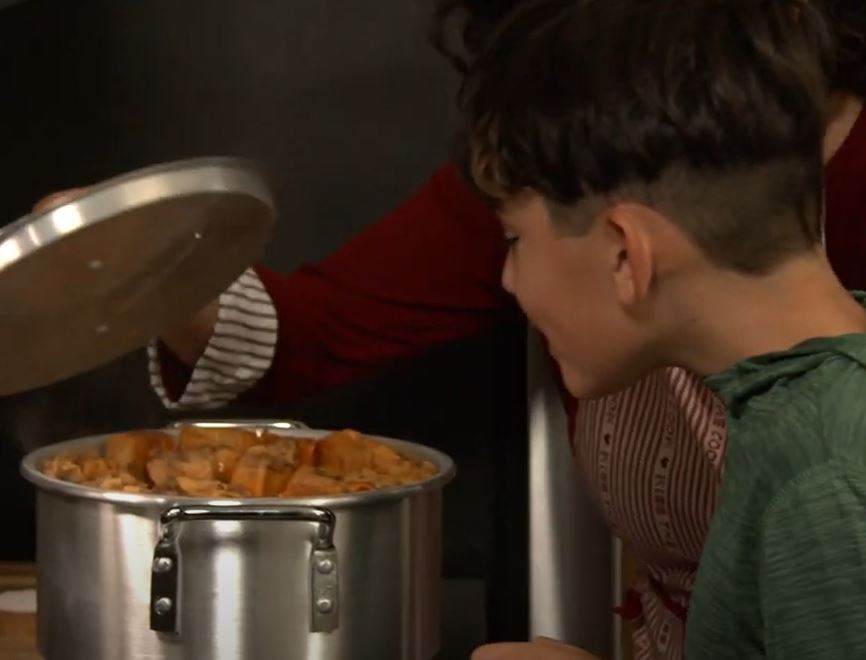 I pushed dad to unwrap those memories.

“Apa, do you like tamales? Did your mother; mi abuela Rosario, make them?”

Of course, I knew she had to make tamales, I felt silly to even ask.

Dad drew his eyes away from the chirping birds to answer the obvious.

He turned his head back to the singing of the birds, I could tell tamales were nowhere on his radar, but I persisted.

He looked at me like I was from Mars. Didn’t little boys or young men pay attention to the details of making tamales?

(Probably not) Weren‘t tamales a big deal in his world? Of course they were! Maiz was an essential necessity for

survival. The 1930s in Mexico was exceptionally difficult for raising a large family, my apa was the first of 9 kids.

Tamales tend to be made in huge quantities so I knew there were tamales in his memory.

Maybe he just forgot the conversation? I had to keep trying, it was a clear minded day.

“You know, what was it like when your mom made tamales? Did you help?”

“I don’t really know. I remember she was busy. When she made them, she was up and down, kind of everywhere.

Look! Those look like crows, chattering away, busy trying to get their meal. Do you hear them?”

So close! The unwrapping had begun. What exactly went with all of the busyness he saw during tamal making

season? Where were all the details? I kept envisioning my own memories, my amaleaning over the olla filled with

masa, a huge pot that she was almost too short to stand over. Stirring and kneading as she prepared it. Did the smell

of cooking meat and spices fill their home?

“Mmmm, what kind of tamales did she make?”

Dad stared at the birds with regret, sad as he remembered his ama.

“De Puerco. Well,I don’t really know, maybe chicken, yes there had to be chicken. Definitely she made pork though.”

Now we both listened to the singing of the birds getting lost in the memory.

“You’re probably right, I wonder if she made chicken tamales like my ama made them. Which ones did you like best?”

Now, he seemed to be rebooting those long term memories, evoking those images of his mother making and serving

tamales. My handsome father had a way of smiling with eyes.

“ Well, I’m sure they were all very good. But the ones I remember clearly are those tamales blancos for sure.”

Yes! I struck gold! Oooh, mi abuela had her own special tamales.

“That's right. No sauce. No meat. Just the masa, which was kneaded and prepared with the right amount of salt”

Wow! What would those “masa to filling” ratio police say to that?! What?! These were mi abuelas special tamales?

These are the ones he remembered most?

“White tamales; plain salted masa salted wrapped in the corn husk. Why did she do that?!”

The smile remained on his face as he explained.

“Those were the ones mi ama made for us kids, a lot of mouths to feed.”

With nine children to feed and wanting to connect hospitably with her vecinos she had to stretch the wealth, Ah si!

Los tamales blancos, a practical meal that kept everyone fed.

Dad looked around and lowered his voice.

“Not really, but I made the most of it. After all, that was what was offered. She would have us line up to get our meal;

in this case our tamal, and we’d go off to eat it”

I was kind of feeling sorry for him, certain that I probably wouldn’t have eaten them, not understanding that it was the

“Doesn’t sound too exciting to eat a cooked ball of masa.”

“She served them with coffee, I ate them well enough.”

“Wow dad! So you never had the meat tamales she made?”

Dad’s eyes sparked with mischief and his eyebrows danced as he remembered those tamales.

“I did. a la desquidada”, when she wasn’t looking I’d snatch a meat one. It was easy since there were eight other kids

distracting her for a tamal. Those were the good tamales, si, they were pork and I didn’t need coffee.”

I could tell dad was glad to have walked through that childhood memory, his eyes continued to smile.

I was glad that I had insisted on taking from dad’s treasure of memories, especially since it would be his last story

Happy Fathers Day, to all dads and granddads and all willing men who stand in the gap to make a solid difference.

Please accept my well wishes for a beautiful day.

0
Recently Viewed
Sorry, there are no products.
Top